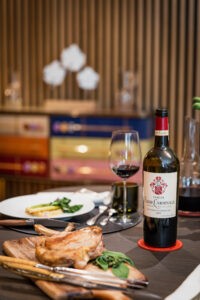 Recipe for 6 to 8 people

In a frying pan, cook the veal trimmings golden with a base of olive oil.

In the same pan, add the shallot, previously peeled and cut into pieces, as well as and the garlic head cut in half.

Brown them for 2 minutes, then add the trimmings, the red wine and let reduce completely.

Add water and veal stock. Let it simmer and reduce for 20 minutes.

Remove the garnish and keep only the juice which you will put back on the heat to reduce it again until it has the consistency of a syrup.

Turn off the heat and set aside.

After washing them, cut the two ends of the leeks to keep only the white.

In a pan, with a base of olive oil, brown the leeks over medium heat.

Season with salt depending on your taste. Keep warm. 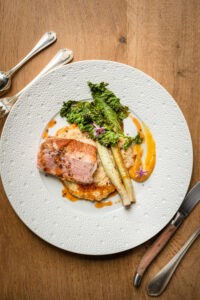 In a saucepan, heat the vegetable stock with a handful of coarse salt.

Once the water is simmering, pour the polenta in while stirring constantly.

The polenta will be cooked when you see the bottom of your pan appear.

If the polenta solidifies too quickly, do not hesitate to add water, and stir well.

The consistency should be soft.

In a bowl, whisk the egg yolk and mustard together.

Pour in the grape seed oil gradually and whisk the emulsion continuously.

When the mayonnaise starts to set, add the saffron filaments.

You can also add a pinch of Espelette pepper if you’d like to.

Set aside in a cool place.

Take the meat out at least 1 hour before cooking.

In a hot skillet, melt the butter with the sage leaves.

Place the veal chop in and cook each side of the meat for at least 5 minutes.

Put the chop in the oven (if the skillet is oven safe, if not, in a dish) with a cold start.

Raise the temperature to 180° and cook for about 40 minutes.

The veal should be pink in the center.

Take the meat out and let it rest in its dish under aluminum foil.

Wash the kale leaves. Place in an ovenproof dish.

Brush them with olive oil and fine salt. Put them in the oven for 5 minutes, until they become crispy.

In a plate, put the polenta in the center. On the polenta, place a piece of veal.

Next to it, place 2 pencil leeks and a few kale leaves.

Finish with the saffron mayonnaise and a cord of veal juice.

A big thanks to the culinary agency HolusGarden for this food and wine pairing made especially for Château Fleur Cardinale.